On September 30, 2019 at the HoSa Solar base in Kocherinovo and in clear weather, we conducted an experiment with two solar ovens. Our experiment was intended to show that a person who goes to work in the morning can put a pot with a dish in the solar oven and when he/she returns in the afternoon the food will be cooked! Both ovens were installed at 9.00am in a north-south orientation (see red line in the photo). In the first oven we put a raw chicken leg in a pot with some water - for cooking and stewing. The other oven also had a raw leg, but without water - for baking. Each piece weight was about 450 grams. The position of the ovens has not been changed throughout the day! The temperature in both ovens reached 130 ˚C by 13h when the sun was at its highest point. We opened the ovens at 6pm and found that the boiled leg was still partially blood-filled inside, but it was consumable. While the other leg was perfectly toasted and with a very nice aroma.
The result of the experiment confirms that non-attended cooking with a solar oven is feasible. All you have to do is observe the following conditions:
- if you are preparing a dish with meat, it is advisable to bake it - especially during the autumn and winter months, when the sun is weaker;
- if the meat is water-cooked, cut it into thinner pieces. In the experiment described above, the chicken leg was quite large and should be cut into smaller and thinner pieces in advance;
- potatoes and any vegetables could be easily stewed in a little water or baked in small pieces;
- place the food in a metal pot, black or dark blue in color from inside, with a glass lid;
- orient the oven north-south;
- raise the oven from the rear by about 10 cm - for better lighting by the sun of the working chamber. 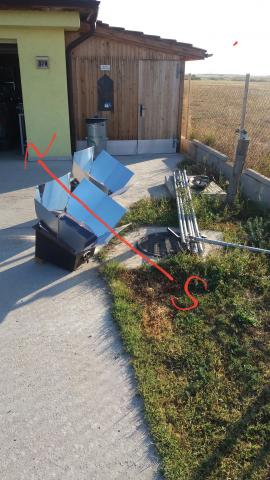 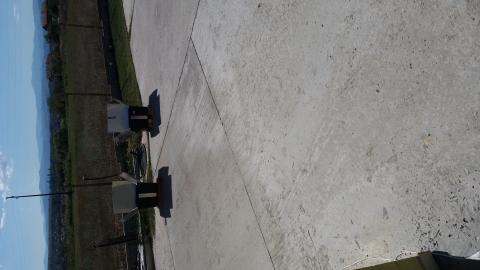 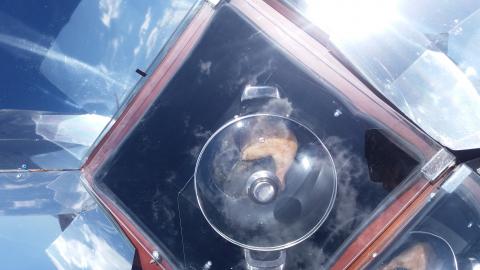 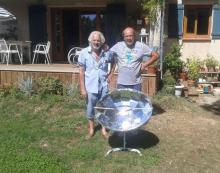 You are doing a wonderful job in Bulgaria. Respect! - ( Sent to the Facebook-page of HoSa Solar, June 15, 2016)
Bernhard Müller